What are Anti-tamper Bolts ?

Anti-tamper bolts are designed so that once installed, they are either; a permanent fixing which cannot be undone again, or releasable bolts which require a special matching security driver to install or undo.

Perma-fix anti-tamper bolts - are one way bolts which are designed to be a permanent fixing such as our range of Shear Bolts, Scroll Bolts or Kinmar anti-tamper bolts. Once installed, these bolts cannot be undone with conventional tooling and as they have no matching security driver tool, if they ever need to be removed subsequently, it would require them to be drilled out, or cut away with an angle grinder or other specialist equipment. 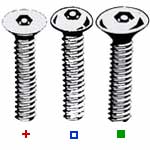 What would I use Anti-tamper bolts for ?

In this day and age the value of metal is worth much more than it used to be, which means that thieves now target any large metal objects they can, with a view to stealing them and selling them as scrap metal.

By using anti tamper bolts when assembling or installing metal structures, you can significantly reduce your risk of metal theft as it makes your equipment much more difficult for thieves to steal, so it not only gives you peace of mind, it also means you don't have to pay out on costly replacements.

Anti tamper bolts are often used to secure park benches, railings, climbing frames and even statues, as thieves today are indiscriminate in what they steal and given their determination and boldness, will try and remove even the largest metal objects in broad daylight.

Who else uses Anti-tamper bolts ?

Anti-tamper bolts can be used by pretty much anyone and are widely used in commercial environments, prisons, banks, parks & playgrounds and town centres. Not only are anti-tamper bolts effective and low maintenance, but they are aesthetically pleasing as well.

...find out more about our full range of anti-tamper bolts ...and which would be best for you

Already know what you need ?

...and remember, when you buy from Insight Security
you're protected by our "No Quibble Money Back Guarantee"