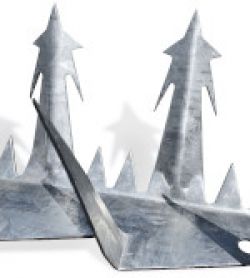 People considering various perimeter security solutions to bolster security around their homes and work premises often ask: Are anti climb spikes legal? The answer to this question is: yes they are - but you need to use them in accordance with the law. So in this post we look at the legal requirements which you need to be aware of.

Many of us are old enough to remember the days when it was common to see perimeter walls topped with broken glass. Back in the day, this was a popular form of intruder deterrent typically used around industrial premises and other areas to keep people out. I personally recall tearing my trousers when a local orchard used broken glass to prevent myself and my friends from climbing their walls and scrumping their lovely apples.

Today’s legislation means that we no longer see walls topped with broken glass but we do see fence spikes, wall spikes and other anti climb precautions which comply with existing laws.

Today’s legislation really started with the 1957 Occupiers’ Liability Act which unified various classifications of visitors coming to property and the duty of care owed to them by the occupier. This law is still valid but has been updated by the Occupiers Liability Act 1984 which covers occupiers liability regarding trespassers. This act extended the duty of care responsibility of occupiers to protect everyone, including criminals, who may come into contact with potentially harmful hazards on their property.

Perimeter security precautions, like the use of broken glass, fall into this category which is one of the main reasons why this particular anti climb technique is no longer widely used.

Another important and relevant piece of UK legislation is the Highways Act 1980. The local highway authority has a duty to ensure the safe use of the public highway and Section 164 of this act deals with what are described as ‘injurious toppings’, giving the local authority the power to have a barrier made from barbed wire, or having barbed wire on it, removed if its considered a potential nuisance.

The term ‘barbed wire’ in this context has been interpreted to include anything with spikes or jagged protrusions, which includes various anti climb devices. And the word ‘nuisance’ is interpreted to refer to anything that can potentially cause harm to people or animals using a highway.

(5) Any duty owed by virtue of this section in respect of a risk may, in an appropriate case, be discharged by taking such steps as are reasonable in all the circumstances of the case to give warning of the danger concerned or to discourage persons from incurring the risk.

This clause tells us that by providing adequate warning of potential dangers an occupier is compliant with the act. Presenting prominently displayed warning signage clearly indicating the presence of anti climb precautions is therefore essential to comply with UK law.

People often want to increase the height of their boundary walls and fencing to enhance their perimeter security. But it must be noted that planning permission is required for any perimeter wall or fence that exceeds 2 metres in height and its important to note that this maximum height restriction includes any trellis or other form of fence or wall topping. So if an existing wall or fence is already 2 metres tall then its likely planning permission would be required to increase it.

Also, if a boundary wall or fence runs along a public highway, including footpaths, then this height restriction drops to just 1 metre. Anything higher than this requires planning permission. Similarly, if a property opens onto a public highway or pathway it is likely that restrictions regarding the erection of fences, walls and growing hedges exist. Its also worth noting that its never acceptable for anything to protrude onto a public highway or footpath.  Its recommended to check with local authorities before going ahead with any work to be certain of requirements.

If a building is listed or is located in a conservation area then planning permission would be required for any proposed boundary changes.

When considering and planning improvements to existing perimeter security its worth remembering that anti climb spikes are not the only option and may not be the most appropriate choice for many environments.

Anti climb paint provides an alternative, non-aggressive security solution that’s often used in conjunction with other anti climb devices. Sometimes called anti burglar paint, this non-setting paint remains slippery after application as it doesn’t set like normal paint. The slipperiness makes it impossible for an intruder to gain a foothold or handhold so this form of barrier works well on walls, poles and posts.

Like many other forms of anti-intruder barrier, anti climb paint must be used considerately. Its generally recommended that the paint isn’t applied to surfaces below 2 metres in height to minimise the chances of getting the paint onto the clothes of passers by. Also, like other anti climb precautions, appropriate warning signage should be prominently displayed.

Another alternative to spikes is our totally non-aggressive Roller Barrier anti climb solution. As noted, spiked anti climb devices are generally not appropriate around many environments such as schools, youth centres, psychiatric hospitals and public buildings. Also, there is often a need to prevent people from climbing onto equipment housings, flat rooftops or scaling protective fencing alongside railway tracks. Roller Barrier is now extensively deployed to provide effective anti climb protection and safety in all of these environments - and many more. But, although Roller Barrier is non-aggressive and harmless, people still need to be warned that an anti climb barrier is in place so warning signage is essential.

Another important option to keep in mind when devising perimeter security improvements is the use of intruder proof hedging. As noted, the Highways Act 1980 talks about ‘injurious toppings’ such as barbed wire or spikes but it doesn’t refer to the use of prickly shrubs.

Various hedging plants such as Hawthorn, Holly and Blackthorn, can act as excellent anti-intruder barriers while also providing some wonderful colour, texture and natural habitat in a garden. A consideration to keep in mind when using hedging is the hedge height and the possibility of causing a nuisance by restricting visibility or blocking light to a neighbour`s house or garden.

Various warning signs are available to alert people to the presence anti climb paint, spikes or other forms of anti climb barrier.

These signs are a low cost way to fully comply with the UK law regarding the use of anti climb devices and often act as powerful anti climb deterrents.

If you have any questions regarding perimeter security or anti climb solutions remember that we are here to help. Give us a call on 01273 475500 and we’ll provide you with free, expert advice.

This message was added on Thursday 12th August 2021