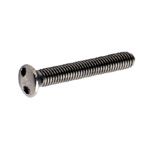 Snake Eye Security Screws or Pig Nose Screws are available in a range of styles and lengths. These 3.5mm Raised Countersunk screws are typically used primarily as electrical screws. They are tamper resistant with an appealing aesthetic appearance. They are reusable making them ideal for applications where medium security is required whilst allowing access for routine maintenance.

The use of 3.5mm Tamper Proof Electrical Screws to secure 240v switch and socket faceplates, is typically specified as part of the safety strategy and policy in; schools, hospitals and public buildings among others.

When substituted for the standard electrical screws supplied with 13amp power sockets or wall type light switches, these anti-tamper screws prevent unauthorised access to the electrical wiring. The screws secure the faceplate or switch cover to the back box and require a matching security driver tool to install or remove.

The standard slotted faceplate retaining screw, is a 3.5mm machine screw featuring a raised countercunk head and is available in various lengths - and as the tamperproof electrical screws are available in lengths up to 75mm (for 75mm screw length see Security Torx Raised Countersunk Head Machine Screw), there is bound to be one to meet your needs.

These anti tamper screws feature twin driver holes in the head which require the use of a matching security driver bit for installation or removal. It is the appearance of the head of these screws with their driver recesses which has led them to be called by a range of names such as Pig Nose Screws, Two Hole Screws or Twin Hole Screws as well as by the more popular Snake Eye Screws name.

Note: a matching Security Driver (which must be ordered separately), is required to install or remove these screws,

...for other types of Security Fasteners - click on the individual links across the top of the page

...or to see All Security Screws and Fasteners - click on Start Selection Again

Step 3 - now select the size you need by clicking on the appropriate 'Eye' logo (stock items) below: