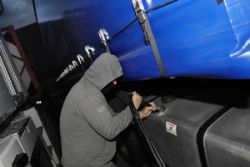 Fuel theft is not only financially costly for the victim, but can also be extremely dangerous, putting lives, vehicles and property at risk.

Despite the recent drop in the price of a barrel of oil (which will inevitably rise again in the future), Fuel Theft appears to be a very real and growing problem across the UK...

Fuel Theft - how big is the problem?

Fuel theft is not only financially costly for the victim, but can also be extremely dangerous, putting lives, vehicles and property at risk.

Despite the recent drop in the price of a barrel of oil (which will inevitably rise again in the future), Fuel Theft appears to be a very real and growing problem across the UK according to recent police alerts and newspaper reports – and it is generally believed that this is a crime which is significantly under-reported, with a large number of thefts simply never getting reported or recorded.

In January 2015 for instance, Sussex Police issued a warning of the increased risk of fuel theft to all commercial premises, advising them to review and beef up their security, following a spate of fuel thefts across the county.

In December 2014, Leicestershire Police offered similar advice to local businesses, following an escalation in the number of Fuel Theft incidents, including an attempted theft at Belgrave Autos in November, which resulted in 14 vehicles being set alight during the raid.

But it’s not just commercial vehicles at risk - here are some of the main types of fuel theft;

…so let’s take a quick look at each of these types of fuel theft in a little more detail; 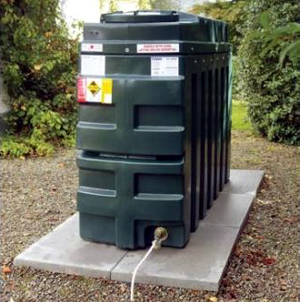 The recommended guide to the storage capacity required for heating oil for domestic premises, is calculated at 500 litres of oil per bedroom, with a minimum storage capacity guideline of 1,000 litres,

It is not unusual therefore, for a homeowner to have over £1,000 invested in stored heating oil at any time, which is why domestic heating oil tanks are such an attractive target for thieves.

Of course it’s not necessarily just the cost of the stolen oil that the victim has to bear, often the storage tank itself is damaged during a theft, which could require the purchase and installation of a replacement tank.

…all of which could be costly to remedy and could even result in legal prosecution and financial penalties.

Here are a few ideas you can consider to protect yourself against this sort of theft;

2 - Theft of fuel from cars 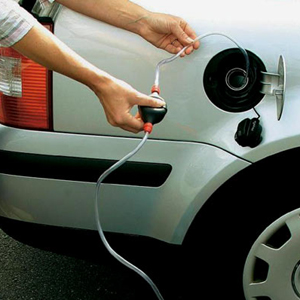 ...it remains a real issue.

One way to help prevent yourself becoming a victim of this type of crime, is to “Lock Your Car” when you leave it – which will ensure the fuel filler access cover is also locked.

If you feel that you are at particular risk of this type of crime, it may be worth considering fitting a "locking petrol cap" which can be used in addition to the locking fuel filler access flap. 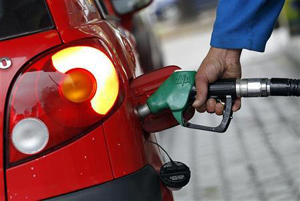 Drivers filling up with fuel at a garage, then driving off without paying (known as Bilking), seems to be a crime in growth mode.

This type of crime involves vehicles of all types from the family car to commercial vehicles such as vans and trucks. In fact as we slipped into 2015, Louth Police in Lincolnshire were investigating an incident involving a driver who put £500 worth of fuel into the tank of his HGV, then drove off without paying.

Whilst drivers may feel aggrieved at the price of fuel for their vehicles, this type of crime can have a significant impact on the fuel stations, who typically operate on very small margins (the vast majority of the cost of the fuel at the pump is made up of the fuel cost from the supplier, plus government taxes – typically leaving the petrol station operator just a few pence per litre to cover all running costs from; rents, rates and premises maintenance and upkeep costs to staff wages).

Advances in technology however are helping to tackle this type of theft. The falling cost of high quality CCTV systems has already seen their installation in most petrol stations, offering clear recorded images of both the vehicles and people involved in such theft. This combined with the government policy of installing fixed position, advanced vehicle tracking and monitoring camera technology, which is in widespread use on our roads, is leading to more and more successful prosecutions, fines or even imprisonment for this type of crime.

4 - Theft from lorries, trucks and other commercial vehicles 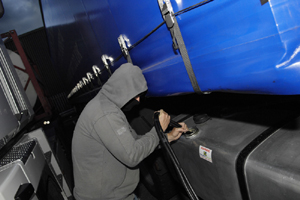 Unfortunately commercial vehicles remain a prime target for thieves thanks to the sheer volume of fuel in their fuel tanks (which in larger transporters can easily cost up to £2,000 per vehicle).

In addition to the cost of the fuel lost, this type of vehicle often suffers damage during the theft as typically the thieves will drill directly into the fuel tank or cut fuel lines, etc. to drain the fuel.

As you can imagine, there is also a high risk of such activity leading to fire or explosion, ...after all drilling into a fuel tank could easily lead to the generation of a spark! In fact the incident at Belgrave Autos in November as mentioned above, in which 14 vehicles caught fire is believed to have resulted from just such an accident during an attempted theft.

Costs over and above the value of any stolen fuel that the victim vehicle owners may suffer include; costs or penalties arising from missed deliveries, lost contracts and other business disruption, repair of damage caused during the theft, such as damage to locking fuel caps, anti-siphon fillers, holes in tanks, severed fuel lines, etc.

Here are a few ideas to consider for protecting your vehicles;

• As with catalytic converter thefts, thieves often target poorly monitored storage yards, compounds or warehouses where fleet vehicles are stored. The thieves will typically assess the risk and opportunities during the day and strike at night or during weekends. So do checkout any strangers walking through your vehicle parking areas …and challenge any suspicious behaviour.

• Adopt Defensive Parking measures whenever and wherever possible, such as;

Vehicles with a high clearance from the ground make fuel tanks and catalytic converters vulnerable and ideal for attack, so try to park your vehicle in a way which reduces this vulnerability and hinders access to these areas.

Park your vehicles so that fuel tanks are as inaccessible as possible, such as parking the vehicle tank close to a wall or park vehicles tank to tank if possible.

• Think about where you park;

Thieves do not generally like to be seen committing a crime, so give thought to where and how your vehicles are parked - would a particular parking pattern allow a better view into your compound from those monitoring the site or anyone passing by?

Don’t make it easy for the thieves - make sure that your compound doesn’t contain items or equipment that may help a thief intending to steal from your vehicles. Items such as empty barrels, tubing, wheel-barrows or objects that could be used for climbing perimeter fencing are examples of things that shouldn’t be left lying about.

Well positioned security lighting will help minimise the risk of theft from your yard or compound. Quality dusk to dawn security lights will make your vehicles visible to anyone passing by without creating glare.

Alternatively installing movement sensor activated security lighting could offer similar protection, but without causing light pollution – in fact this may be preferable, because the lights only operate when movement is sensed, therefore they have a lower operating cost and are also more likely to alert a watcher to the fact that there may be an intruder on site. It is also worth considering covering any lighting with protective caging as protection against vandals.

Recording images of thieves committing crimes are of use after the event, but investing in monitored surveillance where an operator could see a prowler and challenge them via a remote public address system will have a much more immediate impact. The operator monitoring the site could initiate an immediate and appropriate response should the intruder refuse to leave the site, which could potentially prevent a crime from being committed and possibly save on costly repair bills and business disruption.

• Check out and beef up your perimeter security;

A good quality, strong perimeter fence will deter the occasional/opportunistic thief and it should slow down the more organized thieves so that your other security measures such as monitored CCTV can respond. Fencing alone in a remote location will be vulnerable to attack if not supported by some form of surveillance and monitoring.

The fixing of signs highlights the security measures you have put in place and helps deter thieves. They can also remove a potential thief’s excuses for being in a particular area or carrying out a specific action. Some examples:

There are many products available that can make the fuel tanks on your vehicles less vulnerable, but remember, these could be damaged if an offender manages to gain access to your vehicle and fitting such devices may affect your warranty or guarantees. 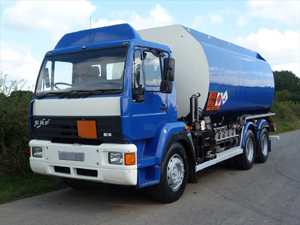 Commercial vehicles are always at risk of theft and fuel transporters are no exception. 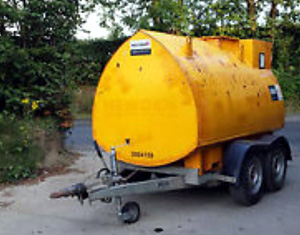 Smaller mobile fuel tanks are also at risk, like this 1,000 litre bowser belonging to Derby City Council which was stolen in November 2014.

Protection of this type of unit can be achieved by storage in a secure compound, however there are obviously times when such units will have to leave the safety of the compound.

Clearly marking the unit with the owners details may deter thieves and will help if the unit is stolen, whilst fitting a tracker device may also be a practical option. 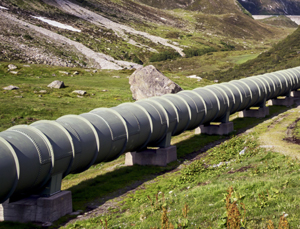 Although a less common type of crime, theft of fuel from pipelines is not unknown in the UK and is not only costly for the pipeline operator but also potentially extremely dangerous.

In April 2014, two men were arrested over the suspected theft of a large quantity of diesel from the pipeline from Esso’s Fawley Oil Refinery in Hampshire to its terminal at Birmingham.

Apart from the cost of the actual fuel stolen, Esso suffered additional costs such as those associated with closing down the pipeline for safety checks and the inevitable disruption this caused to their distribution and supply process.

There are of course other forms of fuel theft not covered above, but one thing is certain, this type of crime is an ongoing problem and one which is unlikely ever to be totally eradicated. There are however a wide range of gadgets and products which can help to make theft more difficult for the criminal, and of course, as indicated above, there are many practical things that you can do to minimise your risk.

We would like to thank the police, press and the other sources for their helpful input on this topic. Here are a couple of the sources which we found helpful (there are of course many more);

This message was added on Tuesday 3rd February 2015