Two Wheel Security When Out and About 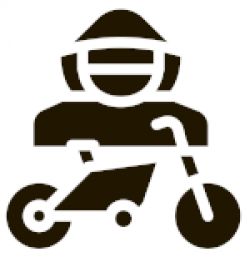 There are many ways to keep valuable bikes and motorbikes safe and secure when at home. But when out and about, security options are limited. In this post we look at what you can do to protect your cycles and motorbikes on the move.

Two wheel security precautions at home will often involve locking valuable bikes inside garages, or bicycle storage containers. Some people bring their valuable bicycles indoors, but this generally isn’t an option for motorbikes or scooters. If left outside, sensible riders conceal their valuable bikes from prying eyes and lock them in place using high quality padlocks, security chains and immovable ground anchors. But when riders are out and about or on vacation they must rely on portable security devices that can be easily carried.

Bicycle theft crime statistics show that, in England and Wales, stolen bicycle reports peaked at around 116 thousand in 2011/12. By 2017/2018 this number had decreased but still exceeded 100 thousand. By 2019/20 the number of reports to the police had fallen to around 88.3 thousand and the decline continued into 2020/21 when around 77.3 thousand bike thefts were reported. But it`s anticipated that the warmer summer months along with the alleviation of COVID restrictions will see bicycle thefts rise again in 2022.

London has the greatest concentration of bicycle thefts each year, followed by Edinburgh, Oxford, Bristol, Liverpool, Manchester, Cambridge, Cardiff, Bournemouth, and Reading. Remarkably, 376,000 bikes are stolen in the UK every year, which equates to around one every 90 seconds.

It`s also important to be aware that bicycle thefts can escalate in very localised areas. For example, York railway station recorded a 33% increase in bike thefts between 2017/18 and the following year. But this percentage was much lower than at Leeds railway station which recorded a staggering 89% increase over the same time period.

Motorcycle theft has become a particularly serious problem in London with more than 9000 vehicles stolen each year in the city. The Department for Transport reports that London based motorcyclists face a 13% chance their motorbike will be stolen and it`s noted that motorcycle theft tends to be more prevalent in the warmers months, peaking in August. The risk of motorbikes being targeted in some areas of London is so high that some people can’t get motorbike insurance.

In around 80% of motorbike thefts, vehicles were stolen directly from the owner’s homes. As noted, more thefts occur in urban areas with high concentrations around central London, due to people commuting into the city. Outside London, top motorbike theft areas include West Yorkshire, West Midlands and Greater Manchester. It`s estimated that around £3 million worth of motorbikes are stolen from UK streets every month.

It`s anticipated that the cost of living crisis and rising prices will result in a ‘crime spree’ as people resort to theft as a way to keep up with rent, energy payments and to feed their children. Inevitably, criminals will go for easy, insecure targets which is why cyclists, motorcyclists and scooter riders need to pay attention to their vehicle security both at home and when travelling.

Weight and size are obviously important factors. Portable bicycle and motorcycle security must provide adequate levels of protection while at the same time not being inconveniently bulky or heavy. While a 22mm high security chain is great for securing a valuable motorbike at home, weighing in at around 12.5kg per metre it`s obviously inappropriate for portable applications. Similarly, a CEN6 rated hight security Squier SS100 padlock with a boron steel shackle and twin locking cylinders is optimum for high security applications, but at 4.3kg this isn’t a padlock you can carry in your pocket.

When considering portable bike security options it`s always a good idea to examine product certifications and reviews to find a solution that’s right for you. Secured by Design is the official police security initiative that provides a product based accreditation scheme to ensure security devices comply with recognised standards. All Secured by Design approved cycle locks have been independently accredited to the Sold Secure standard run by the Master Locksmiths Association.

Another useful standard to look out for is the CEN rating of padlocks. CEN stands for ‘Central European Norm’ and refers to an independent testing standard for padlocks.

The best available portable bicycle and motorcycle locks comply with these recognised standards. They will also offer a warranty which, while it doesn’t provide cover against theft, provides a high level of confidence in the lock construction and life expectancy. And the best locks always attract praising reviews. Here`s what a few of our customers had to say about our high security Sold Secure Motorcycle Gold D-Lock:

How to Reduce the Chance of Theft

It`s important to be aware that all locks can be overcome with the right tools and enough time. The best available portable bike and motorcycle locks will need bolt croppers or an angle grinder to breach them. But the cheapest locks can sometimes be overcome with nothing more than a screwdriver or hammer.

When considering security precautions it`s always useful to ‘think like a thief’ and never leave your bike or motorcycle out of sight unless it`s robustly locked or in the care of someone you trust.

The location you choose to park and secure your motorbike or bicycle, when out and about, it`s vitally important. Often you’ll want to leave your two wheeled transport somewhere secure while you enjoy your visit, do some shopping or maybe have a coffee. Whenever possible, lock your valuable bike or motorbike somewhere inside, such as a secure garage area that’s monitored via CCTV. When parking a motorcycle look out for the ‘Park Mark’ logo. If this isn’t possible, leave it on a well lit, busy street where anyone tampering with it will be seen by passers by. And avoid leaving your bike in the same spot every day as this may be noted by thieves.

When parking motorcycles outdoors, on the street, it`s a good idea to make it difficult for thieves to easily lift it into a van or onto a flatbed truck. Parking in confined spaces, behind planters or other roadside obstacles, can be enough to deter opportunist motorbike thieves who can potentially lift a targeted motorbike into their vehicle in just a few minutes.

Use Your Steering Lock

Many motorcycles are equipped with steering locks. But surprisingly, some riders don’t use them. In one case, a motorcyclist left their valuable bike for only around 45 minutes while they popped into a store. Criminals spotted the attractive motorbike, checked the steering lock and when they discovered it wasn`t secured, simply wheeled the motorbike away.

Invest in the Best Locks

Bicycle and motorbike thieves need to work quickly to reduce the chance of being caught and challenged. While all locks and chains can be overcome, with enough time and the right tools, high quality locks present a significant security barrier that deter all but the most determined criminals. Heavy duty security locks are a worthwhile investment as they make a thief’s objective far more difficult.

As noted, it`s important to select the highest quality, Sold Secure approved locks and use two to keep your bike or motorbike safe. Using two high quality bike or motorbike locks is one of the key recommendations made by UK police forces to help people keep their bikes and motorbikes secure.

And it`s important to use your locks effectively. Ideally your bike or motorcycle should be securely attached to an immovable object or anchor, such as a bicycle lock anchor point in a bike storage area. And locks should be secured around the bicycle frame as well as the wheels.

It`s also important to make certain the bike lock is not on the ground. If a lock is on the ground surface there is greater risk that criminals will attempt to break into it with a hammer or simply a brick.

Theft statistics show that using some form of bike or motorcycle security, such as d-locks or disc locks, significantly reduces the chance of theft.

Register and Security Mark Your Bike

Cyclists should sign up with BikeRegister.com, the police approved national cycle database. They offer kits to enable bicycles to be security marked with unique codes that can help in tracing the owners of stolen bicycles.

It`s also important to be aware of bike piranhas. These are criminals who steel bicycle parts, rather than the whole bike. Some victims have returned to where they have locked their bikes to find nothing more than their bicycle frame and their d-lock still there. Security marking can be applied to all of the bicycle components that thieves might want to steal.

Motorcyclists and scooter riders should register their vehicles with Immobilise.com.
And, as for bicycles, it`s recommended that motorbikes are security marked with their VIN numbers.

It`s always a good idea to take some photos of your bicycle, motorbike or scooter. Keeping a record of your bike details, including the make, model, size, colour, frame number, VIN number (for motorbikes) along with any distinguishing features, can help identify ownership.

Thieves are generally on the look out for bikes, motorbikes and scooters they can dismantle into parts that can be easily and quickly resold for cash. Generally, they seek shiny, new two wheelers that can be readily stripped down. You can make your bike or motorbike a far less appealing target by personalising it and maybe making it look a little tatty.

Feedback from dutch cyclists in Amsterdam and Rotterdam has confirmed that thieves tend to shy away from bicycles that look unique and possibly well used. Some people wrap areas of their bikes in duct take to make it look like they’re the worse for wear and this is reported to have kept the thieves away.

Get the Best Insurance

It`s important to make certain you have the right insurance for your bike or motorcycle. As noted, in some areas of London the high risk associated with motorcycle ownership has made it difficult for riders to even get the cover they need. Be aware that home contents insurance rarely provides adequate coverage for bicycles.

When seeking insurance, always be honest and open with the insurance company regarding exactly how you intend to use your bike or motorcycle, where it will be stored and how you will be securing it when out and about. You’ll find that most reputable insurers are happy to provide security guidance and recommendations to help keep your bikes safe.

If you have any questions about bicycle or motorbike security, or if you have any special requirements, remember we are here to help. Give us a call on 01273 475500 and we’ll provide you with free, expert advice.

This message was added on Thursday 26th May 2022