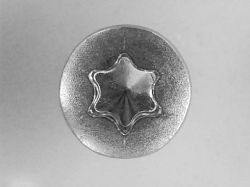 We are all familiar with traditional slot-head screws, which require a flat-bladed screwdriver, and cross-head screws, which might be Phillips or Pozidriv. But there are many additional, specialised screw-types including Torx screws.

Torx is the trademark for a type of screw head, developed by Camcar Textron in 1967. It’s characterised by a distinct, 6-point star-shaped pattern and is often called a ‘star screw’ that requires a ‘star screwdriver’ with a ‘star bit’ to tighten and untighten them.

Torx screwdrivers have distinctive 6-point star shaped head which mate perfectly with appropriately sized screw heads. The unique Torx design means that there is less likelihood that the screw head will be stripped or the screwdriver damaged. Torx screwdrivers can last up to ten times longer than regular screwdrivers due to the resilience of the design.

Security Torx screws are often called Pin Torx due to the additional pin at the centre of the six-point star socket head. This centre pin makes it impossible to use a standard Torx screwdriver, making this type of fastening tamper-proof.

A successor to the original Torx design was Torx Plus, introduced in 1990. This design made improvements on the original which enabled higher torque to be applied while minimising wear.

A further development has been the introduction of the tamper resistant variant of Torx Plus sometimes called Torx Plus Security or Torx Plus TR (tamper resistant). This form uses a 5 point star shaped head socket with a centre pin. 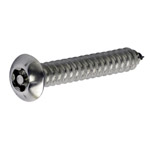 This five-point or five-lobed socket design is generally called a pentalobular socket. The revised design adds a further level of security and requires the use of appropriate tools that mate with the 5-point star socket and central security pin.

As noted, it’s important to match the size of the Torx screw or bolt socket head with the correct size of Torx screwdriver. Here’s a chart showing the standard Torx sizes.

Here at Insight-Security.com we are experts in all aspects of security fastenings, screws and bolts. Contact us on 01273 475500 to discuss your requirements.

This message was added on Thursday 1st August 2019