What You Need to Know About Bolt and Screw Materials 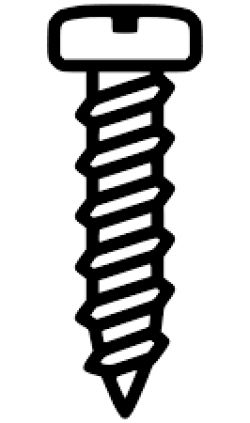 Fasteners, such as screws and bolts, hold everything together. From our cars to kitchen units, if it wasn’t for reliable fasteners everything would fall apart. In this post we look at the materials used to manufacture screws and bolts and why this is important in their applications.

We are all familiar with screws and bolts. Screws are basically a shaft with a corkscrew shaped groove on it`s surface, typically used to fasten one object to another. Scholars believe the screw thread was invented around 400 BCE by a Greek philosopher called Archytas of Tarentum, known by many as “the father of mechanics”.

Early screws were made from wood and used in olive presses to extract oil and in wine presses to squeeze juice from grapes. The Greek mathematician Archimedes is reputed for the development of what’s known as an Archimedian screw or water screw which is recognised as one of the earliest known hydraulic machines. The first records of water screws or screw pumps of this type date back to the 3rd century BC when devices of this type were used for irrigation.

It wasn’t until 1568 that a French inventor, Jacques Besson, developed a screw and bolt manufacturing machine. Further developments in screw technology continued to progress including, in 1770, the invention of the first reliable screw-cutting lathe by English instrument maker Jesse Ramsden.

The origins of nuts and bolts are uncertain but it`s apparent that screws and various forms of nuts and bolts were commonly used as early as the 10th century. Detailed records show how fasteners with screw threads were used in a wide variety of applications such as machine and vessel assemblies.

How are Screws Made?

Metal screws are typically manufactured from rolls of wire which is firstly straightened and then cut to the required lengths. These are then stamped into a die that forms the screw head which is then stamped again to form the various slot types for screwdrivers. These screw blanks are then passed through the thread-forming process before being heat treated and possibly coated.

Fasteners generally need to be reliable. They must hold things together, often under arduous conditions, without risk of failing. As well as the fastener design the following attributes are vitally important:

In some applications attributes such as electrical conductivity and thermal conductivity are also vitally important considerations. And all of these factors relate to the materials used in screw and bolt manufacture.

Screws and bolts are made from a wide variety of materials including wood and various plastics. Here’s a breakdown of the most commonly used materials for screws and bolts.

Grade 2 carbon steel is the most common. It`s low cost with a lower carbon content making the material highly workable. But this is the least durable type of steel and screws will often be coated for protection.

Grade 5 steel is a medium carbon variety and screws made from this material are normally hardened to improve strength. This grade of steel fastener is typically used in automotive applications.

Grade 8 steels are typically medium carbon alloys. Screws made from this material are generally hardened to a high degree making them very strong and most suitable for applications involving high levels of strain, such as vehicle suspension systems.

Stainless steel is a well known steel alloy that combines the workability properties of low carbon grade steel with the added properties of small amounts of chromium and nickel. The chromium provides a high level of corrosion resistance making the steel `stainless`. But it should be noted that due to it`s low carbon content stainless steel cannot be hardened and fasteners made from this material are a lot weaker than hardened steel fasteners. But they are stronger than screws and bolts made from grade 2 steel.

Screws and bolts made from silicon bronze tend to be simply called bronze fasteners. The material is an alloy of tin and copper with a small amount of silicon. It has the advantage of being highly resistant to corrosion as well as being high strength. But a primary drawback is it`s high cost. Screws and bolts made from this material typically find applications in marine environments and other areas where corrosion resistance is vital.

Brass is an alloy of copper and zinc which, like bronze, has excellent resistance to corrosion and is a good conductor of electricity. But brass is a relatively soft metal with low tensile strength. The distinctive gold appearance of brass fasteners makes them a popular choice for stylistic applications.

A primary advantage of aluminium is it`s extremely lightweight. Also, like brass, it`s highly resistant to corrosion. But a key drawback is it`s a soft metal and relatively low-strength fastener material. Aluminium alloys, incorporating elements such as silicon, iron, copper, zinc or manganese, are sometimes used to manufacture fasteners.

Nylon is a lightweight plastic material sometimes used for specific fastener applications. Compared with metal fasteners it has lower tensile strength making it unsuitable for any usage involving high stress and physical load. It also suffers load bearing deterioration under higher temperatures and weakens under cold conditions. But nylon and plastic fasteners are naturally corrosion resistant and don’t conduct either heat or electricity.

As well as Nylon, plastic fasteners can be made from PVC or polypropylene. They are most useful in applications where they are not required to bear any significant load and are commonly found in washing machines and automotive applications.

Fasteners are produced with a variety of coating options. These coatings often enhance the performance of the fasteners or they may be applied for cosmetic reasons. Here are some of the most common coatings used on screws and bolts.

Zinc plating applies a thin coating of zinc which can range from 3 to 5 microns in thickness up to 12 microns. The electroplating process doesn’t ensure an even plating thickness across all areas of a screw or bolt where the plating can be thicker on corners, points and other areas.

Bright zinc plated (BZP) is the most common form of zinc plating used for fixings and fastenings. Other forms of zinc plating include zinc black, which achieves a corrosion resistant black finish and zinc yellow passivate (ZYP) which is similar but uses a different alloy to achieve a yellow finish.

Electroless nickel plating (ENP) is another plating technique that improves corrosion-resistance on fasteners and is often used in electrical appliances. It`s also a popular choice for fasteners used in areas that experience high humidity and condensation. Most fasteners that use ENP first require copper plating to enable subsequent nickel plating.

Tin plating is another effective fastener coating technique that provides a high level of corrosion resistance. Tin plating also improves fastener durability which is vitally important in load bearing applications. Tin is also a great electrical conductor and is suitable for soldering making it highly suitable for many electrical and electronic applications.

Anodising effectively increases the naturally occurring oxide layer on the surface of a metal thus producing a protective barrier with a good level of corrosion resistance. Anodising involves the rapid oxidisation of the material surface, generally achieved using an acid electrolyte bath and passing an electrical current through the medium. Anodising is a popular technique for protecting aluminium surfaces where a variety of attractive colours can be achieved.

Electro brass is a brass finish achieved by electroplating. It`s primarily used for decorative purposes and commonly seen in furniture and architectural applications.

How to Choose the Right Fastener

Selecting the right fastener takes some consideration and thought. Choosing the wrong fastener can have a disastrous impact so it`s worth paying attention to a handful of important considerations.

What is the Application?

The first question that should be answered is how will the fasteners be used and what are they for? For example, the screws needed to secure decking to a framework differ enormously from the fasteners needed to attach a robust ground anchor to a concrete substrate.

Is it an Indoor or Outdoor Application?

The environment in which the fasteners will be used is another important factor to consider. Screws and bolts intended for outdoor use will generally need to be resistant to corrosion. And if they are being used in marine environments they must be able to withstand the corrosive properties of salt water.

And indoor applications involving high moisture levels, such as in kitchens and bathrooms, also benefit from corrosion resistant screws and bolts.

What Type of Fastener is Needed?

There are many types and designs of fasteners from hex bolts and machine screws to self-tapping screws and wood screws. It`s important to consider exactly what type of screw or bolt is most appropriate for a particular application.

Which Fastener Material is Right for the Job?

The application along with the environment in which the fasteners will be used should be enough to determine the most appropriate fastener material. As noted in this post, the fastener material affects many important attributes including strength, brittleness and corrosion resistance.

What is the Right Fastener Coating?

As previously noted, coatings generally improve corrosion resistance and are often chosen for aesthetic reasons. Coatings on fasteners can also improve their usability by preventing galling which occurs when two surfaces effectively seize up as a result of cold welding. This is most commonly encountered when tightening bolts made from stainless steel, aluminium or titanium.

What Size is Required?

Getting the size right when ordering screws and bolts is essential. Applications involving heavy loads and where high strength security is needed generally require larger fasteners.

What Budget is Available?

It was previously noted that screws and bolts made from higher grade steel are tougher but tend to be more expensive. Spending additional money on higher quality screws and bolts is often a good investment as they will last longer and are less likely to fail, which could be disastrous.

If you have any questions about fastenings or what you might need, or if you have any special requirements, remember that we are here to help. Give us a call on 01273 475500 and we’ll provide you with free, expert advice.

This message was added on Thursday 8th December 2022