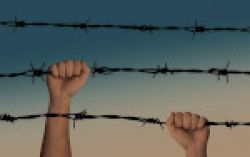 Devising and implementing rigorous anti climb precautions can be enormously challenging. Context and specific requirements must always be considered as there is no ‘one size fits all’ anti climb solution that will be effective in all situations. For example, the need to prevent children from climbing fencing along a busy railway line is a lot different from the need to deter potential intruders from scaling walls and fences around a ministry of defence property.

It’s necessary to be aware of the variety of anti climb devices available today, how they work and where they are most effectively employed. In many situations it’s vitally important that anti climb precautions are entirely non-aggressive in both functionality and appearance.

To understand the differences between what are considered aggressive and non-aggressive anti climb devices it’s useful to examine how various techniques work.

The use of broken glass, set into concrete along the tops of perimeter walls, was once a very common form of anti climb barrier. This is clearly an aggressive barrier that can potentially cause harm to someone who attempts to scale the wall. It’s also a very ineffective anti climb precaution as it can be easily overcome by smashing the glass with a rock or hammer, or laying a blanket over the barrier.

Another important consideration is appearance. While the aggressive, visual aspect of broken glass along the top of a wall will act as a deterrent it also looks very ugly and doesn’t enhance the aesthetic appearance of a property. Although there are many old walls in the UK that are still topped with broken glass it is now illegal to install broken glass as an anti climb barrier.

Barbed wire is another form of anti climb barrier that was once commonly used. It’s clearly aggressive, both in it’s appearance and behaviour which means that it can only be used at heights above 2.4 metres on walls and fences which border areas to which the public have access and this form of installation is likely to require planning permission. Another important consideration is that barbed wire can be easily overcome by intruders equipped with the right tools.

Barbed tape, or razor tape, is a highly aggressive form of anti climb device. Planning permission is required to use this type of barrier which is not suitable for most domestic applications. It is most commonly used in high security applications such as military bases, around prisons and sometimes around commercial goods yards.

A variety of anti climb spike systems are available today, some made from plastic and others from metal. Metal anti climb spike systems such as Razor Spike and Razor Point are purposely designed for installations where aggressive anti climb barriers are appropriate and important such as military establishments, ministry of defence properties, embassies and supermarket goods depots.

The visual appearance of these metal anti climb spikes is purposely aggressive and forbidding. When installed around a property perimeter they immediately create a fortress-style barrier which acts as a strong visual deterrent.

Anti climb spinners create an unstable topping for gates, walls and fences which effectively prevents climbing. Various forms of anti climb spinner systems are available today including the Vanguard rotating anti climb guard which is non-aggressive in it’s behaviour but presents what appears to be a formidable, visually aggressive-looking barrier.

Anti climb paint is a form of non-drying, greasy paint that remains slippery. It’s important never to use this substance below a height of at least 2 metres and wherever it’s used appropriate warning signs should be presented. Anti climb paint is entirely non-aggressive in both its functionality and appearance. While a would-be intruder might mess up their clothes by coming into contact with the substance, they will not cause themselves any harm.

Whatever form of anti climb barrier is used it’s a legal requirement to warn people, unless the installation is entirely domestic and members of the public will not come into contact with it. Presenting prominent warning signs demonstrates that security is taken seriously and will therefore act as a deterrent to some would-be intruders and boundary fence or wall climbers. Warning signs specifically for anti climb barriers, anti climb spikes and anti climb paint are very effective. Importantly, anti climb warning signage is entirely non-aggressive. 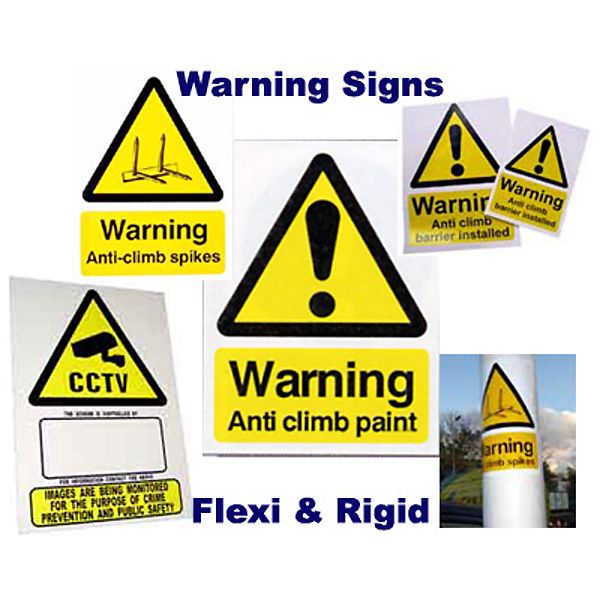 The Occupiers’ Liability Act 1957 provides details of the ‘common duty of care’ that property occupiers owe to all visitors. The common duty of care requires that reasonable steps are taken to ensure the safety of visitors and importantly, an occupier must be prepared for children to be less careful than adults.

The Occupiers’ Liability Act 1984 is all about the duty of care that occupiers have toward people other than formal visitors. This refers to people who have not been invited or are not permitted to be on the premises, such as intruders. It’s important to note that property owners can be liable for injury caused to unwelcome intruders by their anti climb precautions. This is one of the key reasons why many establishments are now using entirely non-aggressive anti climb protection.

It is worth noting that gates, walls and fences are likely to require planning permission or building regulation approval if they adjoin a highway and are more than 1 metre in height or if they are otherwise more than 2 metres in height. And it’s always worthwhile checking with local authorities before installing any anti climb barrier on a boundary that the public can access.

As a general rule, spiked anti climb devices should not be used below a height of 2.2 metres and appropriate warning signs must always be prominently presented. Higher height recommendations may exist in some situations so it’s always a good idea to talk directly with local authorities to ensure compliance before commencing an installation.

The Importance of Non-Aggressive Appearance

As noted, some anti climb barriers are non-aggressive but still present what appears to be an aggressive barrier. This is important as the appearance acts as a climbing deterrent. But there are many situations and circumstances in which an anti climb device or barrier must be non-aggressive in both its functionality and importantly, in its appearance.

A good example is around the perimeter and interior of schools, playgrounds and where children congregate. Anti climb barriers that look aggressive would be inappropriate in these situations as the nasty appearance would potentially make children feel like they are in some sort of prison and possibly cause anxiety in some. Our Roller Barrier system is entirely appropriate for these circumstances as it doesn’t look nasty or aggressive and will therefore not cause any mental distress.

Another important point that’s worth noting is that Roller Barrier is not only an effective gate, wall and fence topper, it’s also a highly effective anti climb device for flat rooftops, shelters and exterior equipment that would naturally attract children who love to climb. For example, the following image shows Roller Barrier installed at a children’s centre where it is safely preventing kids from climbing onto the single storey flat rooftops and importantly, as shown, it’s also protecting exterior fan housings from being climbed on.

Psychiatric treatment centres, hospitals and high security psychiatric care establishments recognise the benefits of Roller Barrier as its appearance doesn’t cause patients to experience anxiety, fear or distress. But it does present a highly effective anti climb barrier which helps prevent patients and inmates from injuring themselves if they attempt any climbing.

Roller Barrier has also been highly effective in the homes of autistic children who need to be kept safe and secure and who might be disturbed by aggressive looking anti climb devices. Roller Barrier’s aesthetic appearance makes it look no more intrusive than regular guttering yet it provides a formidable anti climb barrier that keeps children safe from injury.

The pleasing, non-aggressive aesthetic appearance of Roller Barrier is an important attribute that makes it entirely appropriate for situations where people might find other, aggressive looking forms of anti climb barrier disturbing. Roller Barrier cups can be supplied in a huge range of colours allowing the system to be colour-matched to the building or structure, making it even less obtrusive. It’s a genuinely non-aggressive anti climb device that will not cause physical injury and will not cause anxiety due to the way it looks.

While aggressive anti climb barriers have important roles to play, for example around military or ministry of defence properties, non-aggressive systems are far more suitable for a huge range of applications.

Roller Barrier is now the anti climb system of choice for use in and around: schools, mental health centres, young offenders institutes, prisons, public buildings, parks and gardens, car parks, railway lines and many more locations. Its favoured because it works, it can’t cause injury, doesn’t cause any mental disturbance, is easily installed and looks great.

And anti climb warning signs are another form of entirely non-aggressive anti climb precaution that must always be used in conjunction with anti climb barriers and anti climb paint. Prominently presenting warning signage acts as an effective deterrent that discourages some would-be intruders from even attempting to penetrate a property boundary.

If you have any questions regarding how best to implement anti climb precautions remember that we are here to help. Give us a call on 01273 475500 and we’ll provide you with free, expert advice.

This message was added on Friday 8th May 2020